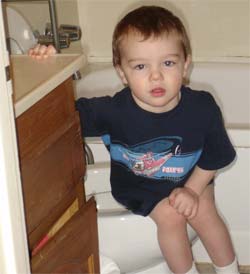 Give me your poor, your tired---your toddlers

The push for education reform is now targeting children so young they still hug their mother's knee at the sight of a stranger.

Last November the race for the governor's turned into a race for our youngest children under the banner of Universal Preschool. Three other states offer preschool to 4-year-olds, but Governor Rod Blagojevich is not to be outdone. He is proposing every 3-year-old and 4-year-old attend state-funded preschool.

I won't glaze your eyes or numb your mind with the staggering numbers it would take to pull this one off. Leave it to say in three years the expansion would hit the $400 million a year mark. Should I mention that the Chicago Tribune reported that 21 percent of all school districts in Illinois are on the state's financial warning or watch list?

Republicans Ron Gidwitz and Steve Rauschenberger also wanted to "dramatically transform" the Illinois public school system. Running in the primary as the "Illinois turn-around team," Gidwitz and Rauschenberger could have better been described as the "turn- 'em- out" team, when they unveiled P-16 Education Plan, setting their sights on children too little to tie their own shoes.

The P-16 Plan is designed, "...to create an educational experience that links and coordinates each education level into a seamless system fundamentally guided by the principle that success in college begins in pre-kindergarten."

With the unveiling of the P-16 Plan, the running mates began with a laundry list of statistics: 30 to 40 percent of our students are unable to read at grade level, half of middle school students are not meeting state standards in math, unacceptable high school dropout rates, unemployment because of lack of education, and colleges who are providing basic literacy training.

So, let me get this straight. Both the Republican and Democrat candidates' proposed solution to this crisis--give us your babies.

Let's stop a minute and take a look at just who they are talking about. They are talking about very young children still in critical developmental stages of life. Many of these little people have barely mastered speech. I have known many bright, inquisitive, intelligent 3-year-olds who needed to have a translator (mommy) by their side to ask for a drink of water.

This is an age where the world is just opening up to them, as their language and cognitive skills are beginning to hit full stride.

Some would say, "YES! So that's when we need to get them into school! We must get them ready to learn."

Okay, let's consider this; let's say that there is a real problem with toilet training. Teachers are complaining that children are coming to school who are not ready to learn. Some children are not being trained appropriately at home and teachers are spending too much time in remedial potty training. It is a health hazard to the staff and the rest of the student population, and a financial burden to the state.

New legislation is proposed; all children must be completely toilet trained by the beginning of school. We must start earlier screening and intervention for "at risk" children.

Whereas; all children have a right to a fresh start in education from the earliest possible moment,

Whereas; too many children come to school unprepared to learn the fundamentals of education,

Whereas; the cost to the state in antiseptics and diaper supplies is reaching into the millions,

Whereas; sickness and disease are easily spread by inappropriate disposal of soiled diapers, and clothing,

Therefore; Be it enacted this day, that all Illinois children will have the opportunity to begin toilet training by age 6 months. We must start earlier screening and intervention for "at risk" children.

Yes it is. And so is ignoring the facts that children need more than their ABC's; there are basic developmental and emotional needs that must be met before academics should be introduced.

It is also illogical to ignore the mountains of research pointing to the consequences of institutionalizing young children. It is unreasonable to take a child away from the one person he needs and relies on the most, and place him in a system that is fundamentally flawed and admittedly inadequate.

The obvious is often overlooked by policy makers, and bad laws and programs are also made when politicians read polls rather than research, and when parents listen to rhetoric rather than their hearts.

Rhonda Robinson has spent the last 19 years in grade school, as a homeschooling mother of nine. She and her husband of 30 years live in central Illinois.

Rhonda pens her perspective as a columnist in newspapers in Central Illinois for East Central Communications on the current social, political and parenting issues shaping the family. Her work can also be found around the web at The Illinois Family Institute, Illinois Review, and Changing World Views.