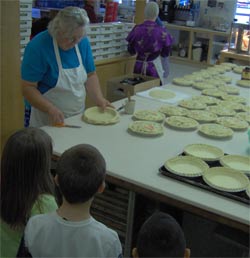 Fall signals an abundance of apples! My family kicked off our homeschooling each and every year by visiting a u-pick apple orchard. We toured the apple orchard, picked apples, ate apples. We looked at all of the different varieties of apples. Then we watched fresh apple juice being made in the farm's cider press, enjoyed a slice of fresh apple pie served in the farm's barn (that had been converted to a snack shack) and really enjoyed the bounty of the apple harvest.

I tried to tie in lots of apple-themed educational activities and lessons that I knew my kids would enjoy. I thought I'd share some of the ones they particularly liked when they were little. I hope your little ones will enjoy them too.

Pick Your Own Apples

There are many u-pick apple orchards. Why not take the kids on an excursion to an apple farm and let them pick some apples fresh off the trees! Many apple varieties are ripe for harvesting in September. Here's a directory of u-pick apple orchards and farms throughout the U.S. and in other countries as well. Before visiting the farm or orchard, visit their website or call and ask if they offer tours or apple cider pressing demonstrations. Plan your visit to take advantage of the events.

Don't be shy about taking an excursion to the local farmers market or even your grocery store just to look at the variety of apples. Buy one of each and bring them home to conduct a taste test! Your little ones will be surprised at the differences in size, color, and flavor. Let them taste the difference between a sweet Fuji or a tart Granny Smith. Notice the color differences from the bright yellow of a Golden Delicious to the deep red of a Rome apple to the striped pattern on a Gala apple -- it's fun to examine and wonder out loud about the differences. This all ties into developing vocabulary for language arts, sorting for math skills, and observing to develop science skills.

If you can't make it to the market or store, look at these pictures of apple varieties.

The first U.S. apple trees were planted by the pilgrims in the Massachusetts Bay Colony. (You may just want to leave that little piece of information with them, or use it to springboard to a discussion about Pilgrim's -- or save this tidbit for Thanksgiving time when the subject of Pilgrims comes up in books and the media.)

The Story of Johnny Appleseed

Little children love to hear about Johnny Appleseed. Here is some information about him — read it together and then take the quiz to help your child remember what he or she has read.

Apple trees were planted and spread throughout the Ohio Valley by a man named John Chapman, better known as Johnny Appleseed. Chapman, who was born on September 26, 1774 attributed his call in life of planting, selling, and giving away apple seedlings throughout what was then the wilderness areas of Ohio and Indiana — to a vision of heaven as a place with orchards of flowering apple trees.

Legend has it that Johnny wore a coffee bean sack tunic, a cooking pot on his head, and went barefoot even in winter while caring for his frontier nurseries and preaching to people he met along the way. He was a vegetarian and never carried a weapon -- defying the custom among men of the time.

Johnny believed that all men should live together peacefully and he attempted to initiate treaties between settlers and Native American Indians. Native Americans appreciated Johnny's skill at growing apple trees and herbs. They thought of him as a medicine man and welcomed him among their tribes.

Johnny collected apple seeds from the discarded pulp at cider mills and distributed them. He understood the value of trees to the settlers who would need trees for food, houses, furniture, tools, and medicine. The tree roots would help to prevent erosion on farms during rainy season, the wood from trees would provide fuel for fires during the winter, and the trees would provide shade from the heat of the sun during the summer.

Johnny Appleseed not only planted apple trees, but returned to the sites where he planted in order to prune and care for the trees throughout his life. After he died, he was honored in the U.S. Congress for his contributions to the American frontier.

Read more about Johnny's life by reading Steven Kellog's wonderful book titled, "Johnny Appleseed." It's a beautiful blend of fact and legend, with wonderful illustrations. It's designed for kids 4-8, but the whole family can enjoy it. Available at your library and Amazon.com.

There are tons of books about the life and times of Johnny Appleseed. Just ask your librarian for help -- you'll be amply rewarded. Record yourself as you read the books to your child, and then you can listen to the story while driving in the car!

You can read the story of Johnny Appleseed online.

Disney has a DVD called "American Legends" that includes the story of Johnny Appleseed along with other American folk heroes. These timeless tales are narrated by James Earl Jones and fun for the whole family. You may be able to rent the DVD at your local library, or you can purchase it through our Amazon.com affiliate.

Did You Know That Apples Bear A Celestial Gift Inside?

If you take an apple and cut it across the middle, you will find the shape of a star inside. Cut many thin slices this way and watch as your children eat carefully around the beautifully formed five-pointed star. 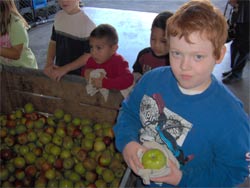 Fun Things To Do With Apples

Cut an apple in half so that you can see the "star" pattern that the core forms in the apple. Put some tempera paint in a bowl and show your child how to dip the cut side of the apple in the paint and press it onto a piece of paper creating an apple print.

Show your child an apple and ask him/her to guess how many seeds will be inside of it. Invite them to find out exactly how many seeds are in the apple. Cut open the apple and pick out all of the seeds. Count them. Do all apples have the same number of seeds? Cut open another one and find out!

There's a bushel of apple recipes kids will love at the Family Fun website.

You will find lots of Apple Activities that include Apple Art, Apple Recipes, Apple Songs and Fingerplays, Apple Books, Apple Games, and more at the Alphabet Soup website. Just click on the apples.

There are lots of simple apple activities for learning a variety of subjects at the Activity Idea Place.

At this website you can play an online Mr. Apple Head game (fashioned after Mr. Potato Head):

Have fun with apples and give your little ones a hug for me!